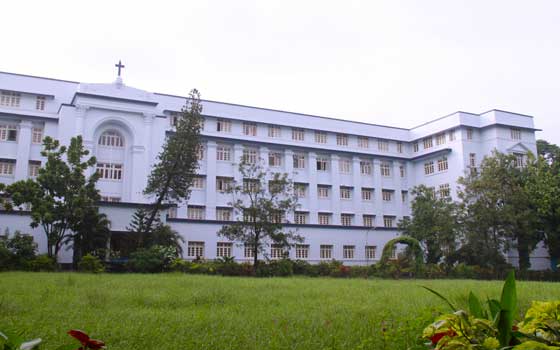 The Pre-Parel Period (1770-1936): The history of the Seminary dates back to 1770, when it was first started by the Carmelite Bishop Dominic of St Clare and housed in his residence, which was attached to the Fort Chapel in Meadows Street. During the following two centuries it was closed down twice (1789-1791 & 1900-1936) and shifted its location to about a dozen places in Bombay and even outside Bombay (Surat, 1852-1855). One realizes that this period bears testimony to the numerous and stubborn efforts on the part of the Vicars Apostolic at establishing an independent seminary that would cater to indigenous vocations. These efforts, some more successful than others, but none of a stable and permanent character, occurred almost entirely within the period of Double Jurisdiction (1794¬1928).

The Parel Period (1936-1960): On February 22, 1936 the Catholics of Bombay were officially informed through the Examiner “The Diocesan Seminary of Bombay has been located at Parel. It will open in the first week of June.” In fact even before the formal agreement between the Archdiocese and Society of Jesus was signed, Archbishop Joaquim Lima SJ signed a Decree dated May 2, 1936 by which the Seminary was formally erected. Translated into English the Decree reads as follows:
“In conformity with Canon 1354, We, by these Letters sealed with Our seal, on this second day of May 1936, the eight anniversary of Our election to the Episcopate, erect and establish the Seminary of Bombay at Parel, and with the best hope of happy results, We declare St Anthony of Lisbon and St Francis Xavier to be its Patrons.” The Examiner adds that the Seminary was placed under the patronage of these two saints, “because of the historical connection of the Franciscan and Jesuit Orders with the missionary activities of these parts.” (1936:227)

The Seminary was inaugurated on June 13, 1936 by Archbishop Lima, S.J. in Parel and entrusted to the Jesuits, since the Diocesan Council decided that the Seminary should be entrusted to the Society of Jesus. In ecclesiastical parlance, a Seminarian graduates from a Major Seminary when it offers Philosophy and Theology Courses in its curriculum. During its first two years (1936-1938), the curriculum of the Parel Seminary provided courses in Languages (English, Latin and Greek), Apologetics and History. From June 1938 courses in Philosophy were introduced. It was only a matter of time before the question of the inclusion of Theology Courses was raised. In 1943 the Parel Seminary diversified into three Departments: Humanities, Philosophy and Theology. In terms of numbers, the Seminary had grown appreciably: the nine students (the original six were joined by three other students in the course of the year) of 1936 had increased to fifty-nine students in 1943! While on the one hand the number of residents in the Seminary gradually rose to about a hundred, on the other hand the Seminary Chapel developed into a full-fledged parish with an attached school. In order to decongest the Seminary, the Theology students were moved to the Pilgrim House in Bandra in 1953, opposite Mount Mary’s Church. Thus the seminary had two wings, one at Parel and another at Bandra.

The Goregaon Period (1960 to date): Soon the Bandra house too proved inadequate for the growing number of students. This led Cardinal Valerian Gracias to shift the Seminary to its present location in Goregaon, where it started functioning with all the students from Parel and Bandra, from July 1960, under the title of “St Pius X College”. The official inauguration was held on October 05, 1960.’ Although St. Pius X College is the seminary of the Archdiocese of Bombay, during this academic year (2010-2011) the seminary has 134 students from 19 dioceses, as well as 7 Religious congregations.