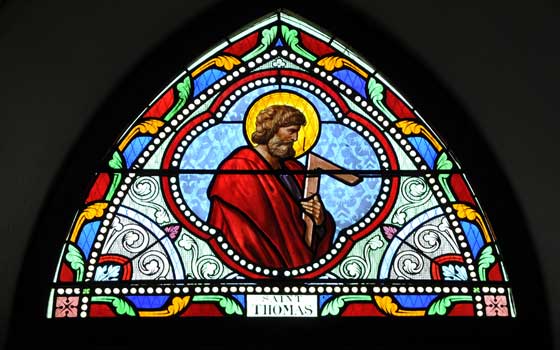 The parishioners of St. Thomas, Goregaon, celebrate each year th e feast of their patron saint with enthusiasm on July 03. Have they ever stopped to think of his origins? Who was he? How did he come to be acquainted with Jesus? Nothing is known of all those facts but whatever we known of him has come down to us from the way he interacted with Jesus and the other disciples.

When Lazarus was sick, Jesus decided to return to Judea to visit him because he was dangerously ill. All the disciples (except Thomas) objected. How could Jesus return to the very place where the Jews had threatened to kill him? It was Thomas and Thomas alone who felt that it would not be advisable to leave Jesus to fend for himself. He told the others, “Let us also go, that we might die with him.” Here is the sincere desire of a bold man who in his love for Jesus, was determined to remain near Him even at a time of danger.

On another occasion, Jesus was trying to explain to His disciples that He would be parting from them. He said, “When I go and prepare a place for you, I will come again and will take you to myself, so that where I am you will be also.” Among all the other disciples, Thomas raised a question, “Lord we do not know where you are going, how can we know the way?” Thanks to this question, the whole of humanity has another revelation of Jesus, who said to the disciple, “I am the Way, the Truth and the Life.”

Thomas is remembered the world over as the ‘Doubting Thomas,’ because he wanted to place his finger and hand into the wounds of the Saviour to convince himself that He had risen. It was a serious failure on his part to disbelieve the disciples on the subject of the Resurrection of Jesus but that was his impetuous nature. Because of this disbelief we are privileged to imagine how Jesus bent towards the disciple to allow him to touch his wounds while also dealing with him firmly: “Be not faithless, but believing.” This was followed by Thomas’ humble act of faith in the Resurrection: “My Lord and My God.” A remarkable confession of faith! Thomas thus goes down in history with his statement which we all use in prayer. 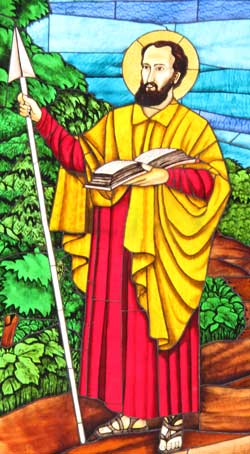 History:
When the feast of Saint Thomas was inserted in the Roman calendar in the ninth century, it was assigned to December 21, although the Martyrology of St. Jerome had a mention of the Apostle on July 03, the date to which the Roman celebration was transferred in 1969, so that it would not interfere with the major ferial days of the Advent Calendar. July 03, was also the day on which the Saint’s relics were translated from Mylapore, on the coast of the Marina Beach, Chennai in India to the city of Edessa in Mesopotamia.

After the Ascension of Jesus, the Apostles cast lots to see where they were to go on mission. The lot for mission of Thomas was India. He was taken to king Gondophares the ruler of Indo-Parthian Kingdom as an architect and carpenter. After a long residence in the court, he ordained local men as leaders for the Church, and left in a chariot for the kingdom of Mazdei the present Indus Valley (Acts of St. Thomas).

Thomas left northwest India when invasion threatened that part of the country and he traveled by vessel to the Malabar coast in the South. There he preached the gospel to all classes of people, including the members of the four principal castes through his missionary activities he was able to convert thousands to Christianity. The various churches he founded were located mainly on the Periyar River in Kerala. Later, stone crosses were erected at the places where churches were built for the people who call themselves “Christians of St. Thomas.”

Thomas then journeyed over land to the Coromandel Coast and ministered in what is now Chennai (Madras) where a local king and many people were converted. His ministry outraged the Brahmins, who were fearful lest Christianity would undermine their social structure based on the caste system. In the Acts of Thomas, mention is made of Masdai, the local king at Mylapore, anxious to avoid popular excitement, questioned the apostle and condemned him to death about the year A.D. 72. He was led to a nearby mountain (the Little Mount), where after being allowed to pray, he was stoned and stabbed to death with a lance wielded by an angry Brahmin.

St. Thomas is represented by the symbols of ‘a spear and a builder’s square’.

St. Thomas is not only the Apostle of India. He is also the patron of architects, carpenters, stone masons and people in doubt.